The Sgt. Alfred B. Hilton Memorial Fund, Inc., has made donations to two elementary schools in the Edgewood area, in honor of the 5th Annual Memorial Celebration of the life and accomplishments of Sergeant Alfred B. Hilton, the only native-born Harford County resident to be awarded the Medal of Honor.

On Tuesday, December 8, 2020, members of the Board of the Fund, led by Board Chairman Curtis Beulah, presented the donations to the Principals and staff members from Edgewood Elementary School and William Paca/Old Post Road Elementary School. 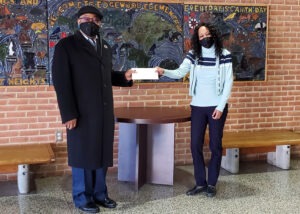 “In these difficult times, the schools in our area need even more support from the community, to purchase school supplies and other necessary elements that allow them to provide both in-person and distance learning for their students,” says Beulah. “As part of our annual celebration of the life and legacy of Sgt. Hilton, we asked for donations, not only for our Foundation, but also to help these schools,” Beulah added.

In honor of the 5th Annual Celebration, held virtually on November 7, 2020, the Hilton Fund promised to donate half of contributions specifically given for this purpose. A total of $3,025 was donated, so each school received $756.25. 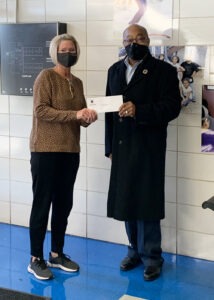 The mission of the Sergeant Alfred B. Hilton Memorial Fund, Inc., is to preserve his memory, establish a memorial in his honor, educate the public about Harford County’s only Medal of Honor recipient, and highlight the impact of the nearly 185,000 United States Colored Troops (U.S.C.T.) who valiantly fought for the Union during the Civil War.

The memorial to honor Sergeant Hilton will be located in Millard Tydings Memorial Park in Havre de Grace, not far from the Gravel Hill neighborhood where Alfred Hilton was born and raised, a free Black man in Harford County. The Fund is also dedicated to providing continuing education about Sgt. Hilton.

“Education is key to not only preserving Sgt. Hilton’s memory, but also in understanding the contribution the U.S.C.T. made to preserve the Union and abolish slavery,” says Redd-Wallace.

Hilton and two of his brothers enlisted in the U.S.C.T. in August of 1863, and fought in the Wilderness Campaign of 1864 and the subsequent siege of Richmond, under the command of General Benjamin Butler. The U.S.C.T. was the spearhead of an attempt to capture a Confederate-held high ground in what is called the Battle of New Market Heights, in September 1864. During the battle, Hilton carried the American flag – referred to then as the “national standard.” When the regimental color bearer was wounded, Hilton recovered that flag and carried both through the first Confederate line and towards the inner Confederate line, until he was mortally wounded. Crying out, “Boys, save the colors,” Hilton handed the flags to other soldiers, and fell.

Evacuated to the U.S. General Hospital at Fort Monroe, Virginia, Hilton died of his wounds on October 21, 1864, and is buried in the Hampton National Cemetery. He received the Medal of Honor posthumously, on April 6, 1865. His posthumous citation reads: “When the regimental color bearer fell, this soldier seized the color and carried it forward, together with the national standard, until disabled at the enemy’s inner line.”

Memorial Fund Chairman of the Board Curtis Beulah is the Harford County Councilman representing District F. As a U.S. Army veteran, Councilman Beulah is dedicated to highlighting the accomplishments and contributions of Harford County’s African-American military members in the cause for freedom.