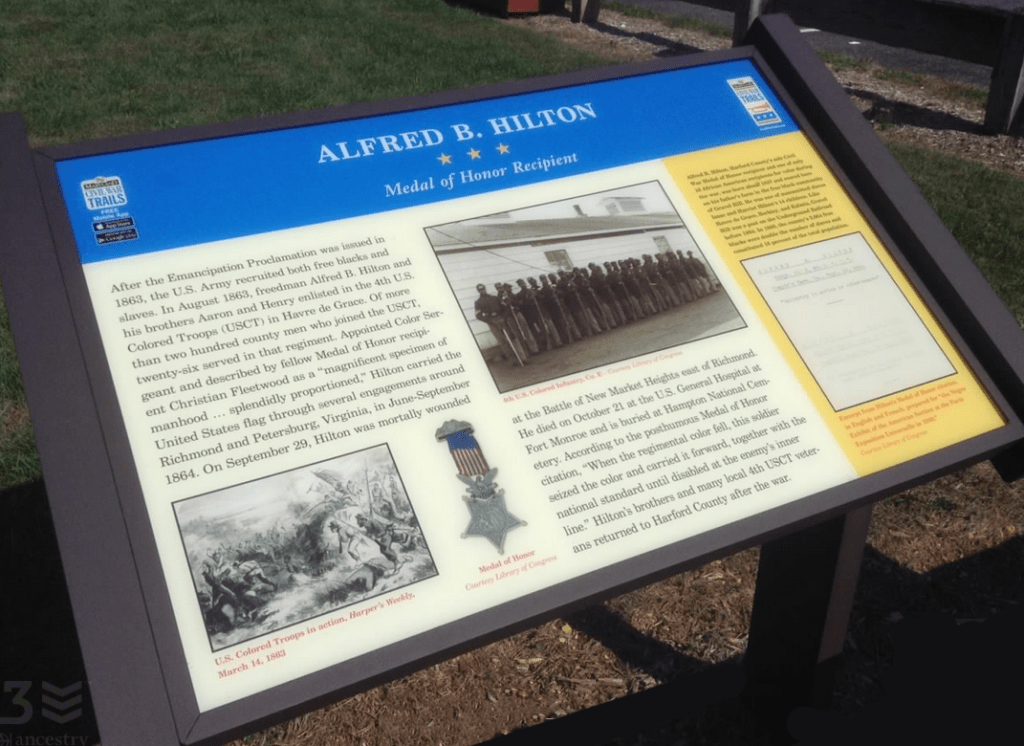 Who was Sergeant Alfred B. Hilton?

Alfred B. Hilton (c. 1842 – October 21, 1864) was born just outside Havre de Grace, Harford County, Maryland. He was an African-American Union Soldier who fought and died during the Civil War.  Sgt. Alfred B. Hilton is the recipient of our nation’s highest military award — the Medal of Honor. Hilton is one of 16 African-American Union Army Soldiers who received the Medal of Honor for their service during the Civil War, and the only service member from Harford County ever to receive the award.

Presented for valor in action against an enemy force, the Medal of Honor is bestowed upon an individual serving in the Armed Services.

Alfred B. Hilton was born in the Hopewell area of Harford County (now called Level) around 1842. He was the son of Harriet and Isaac Hilton, free citizens who had formerly been enslaved in the county. Along with his brothers Henry and Aaron, Alfred Hilton enlisted in the 4th Regiment United States Colored Troops (U.S.C.T.) in August of 1863 (during the Civil War) and was immediately chosen to be Sergeant. He faithfully served the United States in various military capacities, and bravely fought in defense of the Union in numerous battles against Southern forces.

In May of 1864, Sergeant Hilton was appointed Color Sergeant, and was tasked with carrying the National flag (what we would now call the United States flag) for his regiment in combat.

On September 29, 1864, Hilton and his regiment advanced ahead of Union troops in an assault against entrenched Confederate defenses at Chapin’s Farm (sometimes called “Chaffin’s” Farm), part of the Battle of New Market Heights, outside Richmond, Virginia — a critical engagement during the war.

During the battle, Sergeant Hilton was wounded, but continued forward, carrying his flag. He then rescued the Regimental standard from a fallen soldier in his unit, and carried both the National and Regimental standards until he himself was unable to continue.

Saying “Boys, save the colors!” he passed both standards to other members of the U.S.C.T. before he fell. 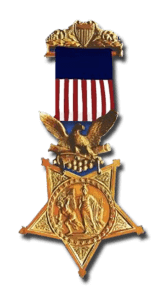 Sergeant Hilton was taken to a segregated unit of a field hospital in Hampton Roads, Virginia, where he died from his wounds on October 21, 1864. He is buried in the Hampton National Cemetery.

On April 6, 1865, Sergeant Hilton was posthumously honored by the United States War Department with the Medal of Honor for “Gallantry in action as color-bearer,” with a citation that read:

“When the regimental color bearer fell, this soldier seized the color and carried it forward, together with the national standard until disabled at the enemy’s inner line.”

He is one of only sixteen African American Civil War soldiers to be awarded the Medal of Honor, and remains the only Harford County native to be honored with the nation’s highest military decoration. Other soldiers received various distinguished honors.

Here is that tribute. Thanks, County Executive Glassman!

About the Sgt Alfred B. Hilton Fund

The mission of the Sergeant Alfred B. Hilton Memorial Fund, Inc., is to preserve his memory, establish a memorial in his honor, educate the public about Harford County’s only native Medal of Honor recipient, and highlight the impact of the nearly 185,000 United States Colored Troops who valiantly fought for the Union during the Civil War.