About the United States Colored Troops

The United States Colored Troops (U.S.C.T.) were regiments in the U.S. Army recruited originally during the Civil War (1861-65), composed primarily of Black soldiers, although members of other minority groups also served with the units. Whites served in supervisory and officer roles. 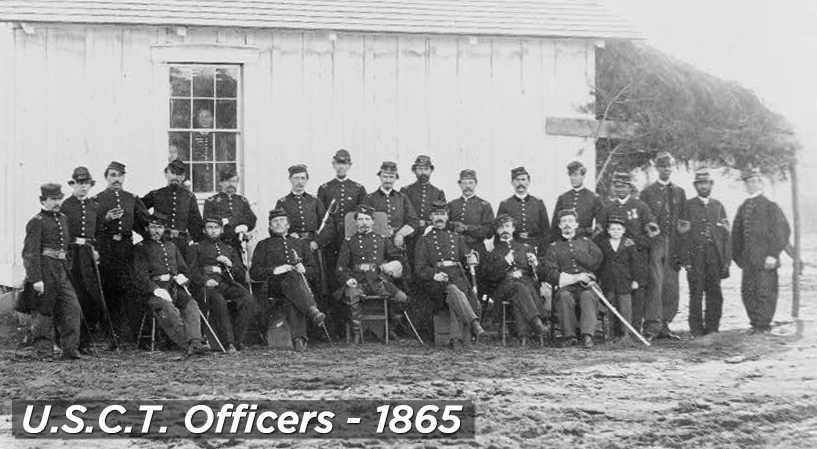 U.S.C.T. units were recruited extensively during the Civil War, and by the end of the war there were 175 U.S.C.T. regiments (including seven from Maryland), making up about one-tenth of the Union Army’s entire number. About 20% of U.S.C.T. soldiers died in combat or from wounds, a rate about 35% higher than that of white Union troops. Despite such heavy casualties, the U.S.C.T. regiments fought with distinction and honor, answering questions about their fitness to serve the Union. In the words of commanding General Benjamin F. Butler after the New Market Heights battle, their capacity to be worthy soldiers “had then and there been fully settled forever.” 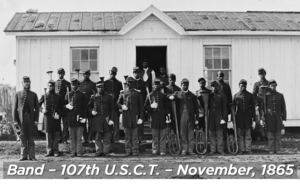 Few documents remain that record the many contributions of the U.S.C.T. Even fewer photographs and other documents exist detailing their lives and sacrifices. Research is continuing to help identify and appropriately recognize U.S.C.T. graves throughout the United States.

Here in Harford County, local historians and researchers have found the records of approximately 75 U.S.C.T. solders with Harford County connections. Members of the Sgt. Hilton Memorial Committee and others are scouring cemeteries and records to identify final resting places, and, as necessary, to ensure that appropriate markers are placed in their memory.

Over 9,000 soldiers enlisted in six Regiments here in Maryland — the 4th, 7th, 9th, 19th, 30th and 39th Regiments. Our research continues to identify the soldiers who served in these regiments, and locate their grave sites in Harford County. Here is a report on our work so far.

Located a short distance from Sergeant Hilton Park, on land still owned by the Hilton family, sits the historic St. James African Methodist Episcopal Church and cemetery. Established in 1849 and erected in 1881, it is the final resting place of at least seven members of the United States Colored Troops. Only two memorial markers are still visible — those of Santee Bowser, Company E; and Lewis Bowser, Company B: both of the 43rd Regiment, U.S.C.T.

We have also located United States Colored Troop graves at the former Green Spring AME Church, located at Old Level and Green Spring Roads. It should be noted that Sergeant Hilton’s brothers Aaron and Henry are interred here, though only Henry’s marker is still visible. Both brothers were mustered into the Army along with Alfred B. Hilton in 1863. There are several other USCT members buried at Green Spring; we have located markers for R. J. Turner (Company F, 4th Regiment), L. W. Green (Company B, 127th Regiment), and Benjamin A. Green (Company D, 24th Regiment).

At Union United Methodist Church, 700 Post Road in Aberdeen, we have found one U.S.C.T. grave — that of Benjamin W. Tildon of Company D, 39th Regiment. Any other U.S.C.T. markers that might be there are no longer visible.

The former Mt. Zion Methodist Church, also known as “Mountain,” is located on Singer Road in Joppa. The church, school and graveyard are now under the umbrella of the historic Hosanna School Museum. At this time, we have located one U.S.C.T. memorial marker here: Joseph Smith, Company E., 30th Regiment.

If any of our viewers are aware of other U.S.C.T. burial locations in Harford County, we encourage you to reach out to us via our website, or better still join us in our research.